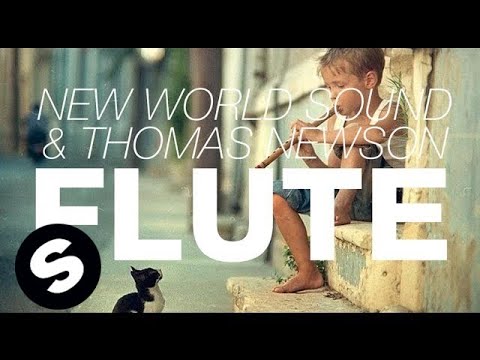 Download on iTunes:
Grab your copy on Beatport NOW :

New World Sound joins forces with up and coming Thomas Newson for a massive collaboration on brand new single ‘Flute’, to go out on DOORN on 11th November.

A 50 second preview was released last week hyping the video as a tantalising teaser for the track, which already racked up over 180,000 views on Youtube and hit #1 in the ADE Buzz Chart. The ID left everybody under the impression it was a new collab from W&W and Blasterjaxx. Originally keeping the artists a secret Spinnin’ reveals now the genius behind the track as New World Sound and Thomas Newson.

Built around the haunting pan flute that leads into a thumping bassline, the track combines an intense riff at the core of the track layered with the classical flute to create a peak time dance floor filler.

New World Sound aka 21 and 19 year old brothers Tyrone and Jesse Taylor are two DJ/ Producers currently dominating their homeland around the Gold Coast of Australia, and the world. Their first release ‘Peak’ earned them huge support from artists such as Tiesto, Ferry Corsten and Judge Jules as well as a score of other hugely influential artists.

New World Sound emerged from the studio again in October 2012 with ‘Bantam’, a dubstep infused club banger, and received praise from the Grammy Award winning David Guetta, placing it on his monthly top 10 Beatport chart and playing it twice on his F**k Me I’m Famous podcast. The release of ‘Aye’ in June 2013 marked the duo’s signing to Avicii’s label LE7ELS and earned New World Sound their first ever BBC Radio 1 play during Pete Tong’s weekly essential collection show. They host a weekly radio show on Australia’s premiere Dance Music Station, Radio Metro.

Thomas Newson is only 19 year old, yet he looks set to be one of the next up and coming producers. With support from Hardwell dropping his track ‘Pallaroid’ during his explosive set at Tomorrowland this year, this relative newcomer is one to look out for.

The Spinnin’ Records YouTube channel is the home for all music videos of the world’s leading dance record label!

Make sure to subscribe to Spinnin’ Records:
..and turn on notifications to stay updated with all new uploads!🔔