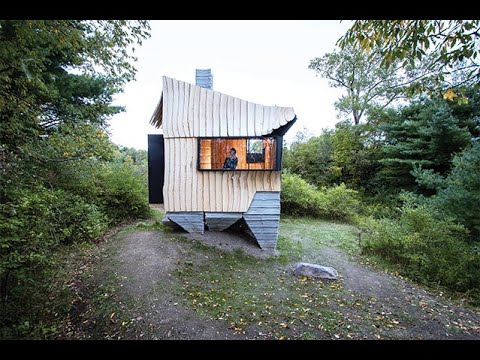 A webcast lecture by Leslie Lok & Sasa Zivkovic with introduction by MIT Architecture’s Nicholas de Monchaux from April 16, 2020, as part of an ongoing stream of online departmental programming.

HANNAH is an experimental design practice that leverages and augments ordinary technology for material, spatial, and cultural experimentation in built projects across scales. The work is driven by tectonic and material explorations in architecture. The design voice of Leslie Lok & Sasa Zivkovic, HANNAH is a platform to unapologetically test and explore current personal architectural obsessions surrounding: material misuse, forms, construction, concrete, DIY robots, trees, toolpaths, and buildings. HANNAH’s RRRolling Stones project won the 2018 Folly/Function competition hosted by the Architectural League of New York and Socrates Sculpture Park and was named a Next Progressive by Architect magazine. The practice recently completed a full-scale 3D-printed Ashen Cabin in Ithaca, New York (pictured above).

Leslie Lok is an assistant professor and the BArch Coordinator at Cornell University College of Architecture, Art, and Planning. Allied with computational technology and with a focus on urbanism, her research and teaching explore the intersection of housing, urbanization, and mass-customized construction methods at multiple scales. Lok received her master of architecture at MIT and has previously taught at McGill University.

Sasa Zivkovic is an assistant professor at Cornell University AAP where he directs the Robotic Construction Laboratory (RCL), an interdisciplinary research group that investigates the implementation of robotic based construction technology. Zivkovic received his MArch at MIT where he was the recipient of the AIA Certificate of Merit.