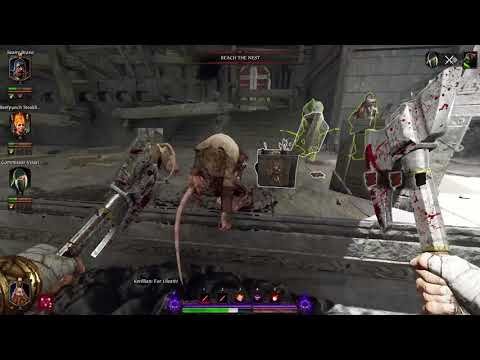 Hero Power 600 (equipment and talents in beginning of video)

Twin-Axes – Best against armored enemies, able to one-shot stormvermin with one strong attack and one push-attack (if both axes hit), as well as 2-3 shotting chaos warriors. VERY handy against shield-wielding stormvermin, able to quickly break their guard in two light-hits and ending them with a strong attack (9:14, 13:25, 17:44)

1H Hammer – Amazing for horde CC and reviving teammates (as it has the highest stamina for Slayer weapons). Try to leap IN FRONT of the horde while blocking, then begin the 3-hit swing combo, ending with the push-attack that counts as your 4th swing, and repeat.

– When leaping towards a horde, aim for the FRONT of them so you don’t get surrounded and dead. Use of the 2-handed hammer/axe, or 1-handed hammer is best for this due to the insane CC.

– Temporary health on kills is a must, especially for the kind of crowd clearing you want to do (expect to get hit, you got the balls to play Slayer, after all)

– Dodge, dodge, dodge! Practice and improve your dodging and weaving vs. hordes and elites (pretty general of a tip as it gets, seeing as its important for every character)

– Against bosses, always try for the charge attack on the twin-axes. Try to switch quickly between your axes and 1h hammer when you pull their aggro, then go ham when its targeting your teammate (13:55)

– Adding to that, use your leap to ESCAPE when cornered by the boss (you will jump through them when doing this)

Not quite ready for Legend difficulty (my go-to is Footknight for that), but Slayer is my favorite subclass for sure. Some of the most fun in Vermintide i’ve ever had.