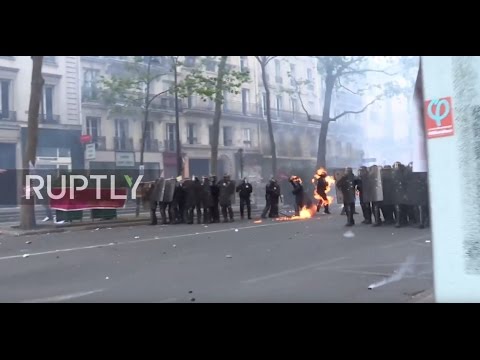 Major clashes broke out between riot police and May Day protesters in central Paris, Monday, leaving dozens wounded on each side.

Footage from Paris captured the intensity of the clashes, with a police officer even catching fire due to a Molotov cocktail thrown by the protesters. The high numbers of police responded with stun grenades and tear gas in an attempt to disperse the crowd.
Dozens of facades, windows and bus stops were also damaged in the process.

Parisians are marking May 1 in the capital at Place de la Republique, where they are protesting against the outcome of the French presidential elections, which have seen Emmanuel Macron pitted against the National Front’s Marine Le Pen.