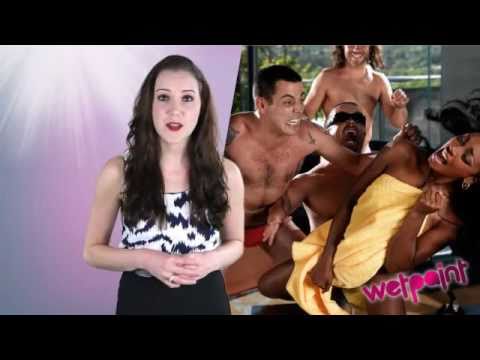 Hey there, Top Model fans — I’m Jager Weatherby from Wetpaint Entertainment. Y’know, for all the semi-ridiculous challenges the models are tasked with — Hello, walking on water in a plastic bubble! — ANTM photogs have given us some seriously beautiful pics. Even Tyra Banks herself has gotten behind the camera and directed a few awesome shoots. No doubt about it, they knock a lot of ’em out of the park. But once in awhile, there’s an artistic concept that just doesn’t seem to gel. For instance, we would have loved to have been at the production meeting where someone looked up and said, “Let’s get those dudes from Wildboyz to pose with the models.” Yeah, because that really happened. Let’s look back at a few more of the most ridic photo shoots in ANTM history.

The “Four Personalities” shoot of Cycle 8 just plain confused us. One of Tyra’s running critiques throughout the long, winding history of ANTM is that models should never look like they’ve been hanging out in the mall. So why, then, did this photo shoot look like it was taken at a mall kiosk? Each contestant had to embody four different facets of her personality — silly, sexy, smart, etc. The four pics were then arranged together with weird borders and graphics. It just didn’t do these gorgeous ladies any favors and gave off the impression that the show went over-budget before it was time to plan the photography portion of the episode. All of the money must have gone into a runway challenge on the edge of a mountain.

Ah, remember the “Fashion Victims” photo shoot of Cycle 5? Now, while it’s true that anyone wearing a Juicy Couture sweatsuit with heels should be taken aside and scolded, we’re not sure that having Miss J dressed as a witch chasing these kinds of “victims” was really a super solid concept. Not only were these pics un-Vogue worthy, we’re not even sure they would make it into Highlights magazine.

So, what about that time Fabio showed up in Cycle 7? Yeah, we’re actually not sure if the romance novel covers he shot with the contestants were the best — or worst! — photos in the history of the show, but we’re positive they were at least ridiculous. No offense to Fabio, but he’s Fabio… and even he’s like “Yeah, I’m Fabio.” We just didn’t buy that the reason the producers invited him to do this shoot was to demonstrate the difference between sleazy and sexy. They invited him to demonstrate his Fabio-ness, which he did with great aplomb. The shoot itself seemed really fun — who wouldn’t chuckle at a book called “Don’t Leave Me!”? But when it came time for panel, it seemed sort of insane that these photos were going to be seriously critiqued. How could someone get sent home for this? I mean, really?

Agree with our picks for most ridiculous shoots? Let us know in the comments sections below or on our Facebook page at